Antique Persian rugs deserve their high reputation. Although the art of weaving has been practiced in many regions of the world since ancient times, it is undeniable that the finest antique rugs are often Persian of origin.

The history of antique persian rugs

The perishable nature of textile material has made it very difficult to determine when rug weaving began in Persia and how it developed. However, historical records suggest that Persian rugs must have been woven for several centuries before BC and adorned court palaces since at least the time of the Achaemenids (550-330 BC). The latter promoted trade with neighboring countries, supporting in particular the exchange of goods on the silk road with the east. One can assume that Persian rugs have been part of that commerce. Indeed, a fairly accomplished carpet fragment dated 500 BC with Achaemenian design elements was discovered in Pazyryk far to the east of Persia in the grave of a Scythian prince.

Unfortunately, no further evidence of rug-making is available until the Sassanid era (3rd-7th century AD) when pre-islamic Persian culture and power was at its apogee. Historical records and the few textiles that have survived indicate that antique Persian rugs at that time had reached a high level of sophistication. Historians mention in particular an astounding carpet of remarkable size, woven in silk, gold, and precious stones, decking king Khosro's imperial palace at Ctesiphon. The carpet, known as the 'Baharestan' or 'spring garden' carpet, for its depiction of a garden in spring, was apparently lost forever when the city was sacked by the Arabs.

After the fall of the Sassanid empire up until the end of the 15th century, Persia was subjugated by a succession of foreign intruders, first the Arabs who spread Islam across the Middle East, then the Seljuk Turks, followed by the Mongols and Timurids, while provinces like Egypt under the Mameluks also rose to prominence. Consequently the center of power and culture moved to new capitals outside of Persia, such as Damascus, Baghdad, Samarkand, and Cairo. Hitorical documents and eyewitness testimony of rug weaving during this period, including those of the famous travellers Ibn Batuta, Marco Polo, and Ibn Khaldun, and the rare textiles that have survived referred mainly to these centers, providing little direct information on Persian production. Nevertheless, the Persian influence was ubiquitous in the arts and fashions of that time, as the conquerors and new aristocracy admired and often adopted Persian culture. Thus, lacking concrete evidence, one can only surmise that rug weaving persisted in Persia during this era.

Indeed, the carpet industry in almost all present-day centers of production, including Tabriz, Kashan, Kerman, and Isfahan, was already in full bloom when power shifted back to Persian rulers under the Safavid dynasty (16th -18th century AD). The famous Emperor's and Ardabil carpets date from that period. By the end of the Safavid dynasty in the early eighteenth century, rugs were woven by households in villages and nomadic tribes across the Persian territory and in city workshops that catered to the aristocracy.

After a hiatus at the end of the Safavid reign, the weaving industry took off again in the second half of the nineteenth century with the considerable expansion of trade and rise in demand from the West. In effect, except for the very rare historical pieces mostly kept in museums, the vast majority of antique Persian rugs date from that time.

​​Contact us if you wish to appraise an antique Persian rug. See detail on our appraisal services.

How to recognize antique Persian rugs

After the second world war, with the opening-up of global trade, many countries, notably China and India, began imitating Persian designs and technique in earnest, and their products improved considerably. So it can be very difficult to identify the origin of a modern rug without a thorough inspection, and frankly it is irrelevant.

However, older rugs are easier to identify because each region and each tribe still maintained long-held traditions in design, colors, and technique. These traditions varied from province to province, if not from village to village, within Persia, reflecting its rich history and diverse peoples. For instance, symmetric, or 'Turkish', knots were used in the northwest of Persia and by several tribes, while mostly asymmetric, or 'Persian' knots were used elsewhere. The design is geometric in Heriz rugs, floral in Kermans with a pinkish cochineal red, while a deeper madder red is found in Kashan rugs. So there is no single characteristic that distinguishes all antique Persian rugs. Rather, one recognizes an antique Persian rug by recognizing the features of a particular weaving center within Persia, such as Heriz, or Kerman, or Kashan.

Although some village and tribal Persian rugs are highly sought after by collectors, it is the rugs woven in centers like Ispahan, Kerman, Tabriz, and Kashan which made the reputation of Persian carpets. Each center had been established for centuries, setting them apart from relatively newcomers such as Heriz or Sultanabad. Up until the early 1900's, the products from these centers were mostly luxury items destined for the upper classes. They were consistently of high quality, of fine tightly packed and double-decked weave, with excellent natural dyes, except during a transitory period at the turn of the 20th century when some producers delved into chemical dyes. The designs were elaborated in advance on blueprints, thus eliminating potential irregularities, and giving the pieces a more formal look.

The following is a short guide on Persian rugs. Please contact us if you wish to sell your Persian rug. 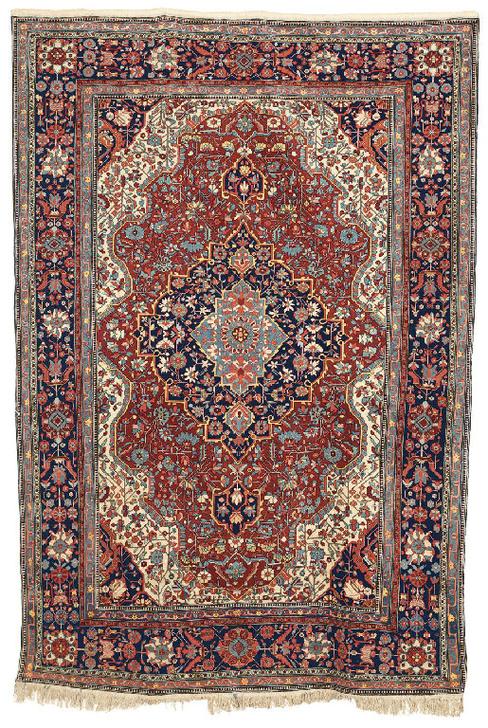 Generally speaking, antique Persian rugs are priced higher than others because they are usually of higher quality. But Persian rugs can come in very poor quality as well. So each piece has to be assessed on its own merits. Village and tribal rugs are prized for their authenticity and personal and cultural character, while 'city' rugs are valued for their design sophistication and refinement. 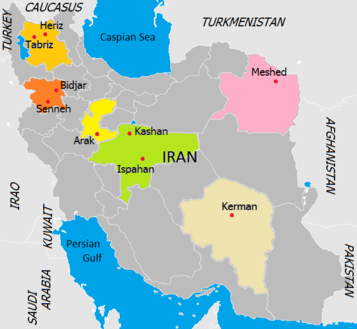