The price of an antique 19th century Oushak is mainly determined by its decorative value, the quality of its wool, its color harmony, and condition, with the density of the weave of less importance. At reputable auction houses, these rugs have in the past grossed several thousands, but the demand for large carpets has been subsiding and the market does not seem to bear as much of these rugs as it used to.

how to recognize antique oushak rugs

Unfortunately, very few of the earliest Oushak carpets, sometimes classified as 'Holbein' or 'Lotto' or 'Star Oushak', have been preserved. These early Oushak seemed to favor red tones and a somewhat severe lattice or kufic design. Most antique Oushak rugs available today on the market date from the late 19th century or later, when the rug industry saw a revival. These carpets were generally large in size and decorative in style, produced specifically for the western markets, particularly the U.S.. They used high-grade luminous and soft wool, and a rather coarse weave and long pile. What distinguish them from their predecessors and from most other oriental rugs is their spacious and open design well suited for their size and weave, and a lighter, pastel color palette, although sharper colors are not uncommon.

The industry has become much more diversified in modern times, and nowadays Turkey produces beautiful pieces in a large variety of colors, sizes, and grades, both flatweave kelims and pile. Nevertheless, as in the past, modern Turkish rugs have a predilection for geometric and stylized designs, and natural or realistic representations are rare. Modern Oushak carpets also continue to be produced of excellent quality.

Antique Oushak carpets originate from the province of Oushak in the west of Turkey, a region that has been an important carpet weaving center for several centuries. Although they are not the earliest woven, Oushak rugs were nevertheless the first to be traded on a commercial scale with the West starting probably in the fifteenth century under the Ottomans. They became a symbol of status, as can be seen in European paintings of the Renaissance, such as by Hans Holbein and Lorenzo Lotto, where Oushak rugs are meticulously depicted in surroundings of wealth and power. 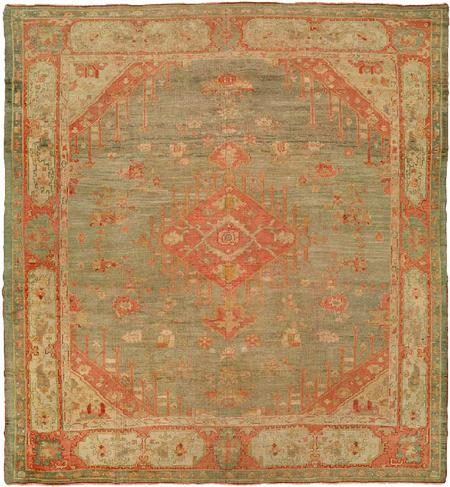 The following is a short guide on Oushak rugs. Please contact us if you wish to sell your Oushak rug.

Other antique Turkish carpets that were exported to the west, such as those from Sparta, were usually of much lower grade, recognized by their dull colors and wool. As a result they rarely survived to this day in good condition. Antique Turkish rugs that were produced for the local Turkish market and not intended for exports were in vast majority small in size, most often prayer rugs and yastiks or pillow covers, although long runs were not uncommon. These sometimes found their way to the west through private collectors or gifts and people migration.