​Contact us if you wish to appraise a Heriz or Serapi rug. See detail on our appraisal services. 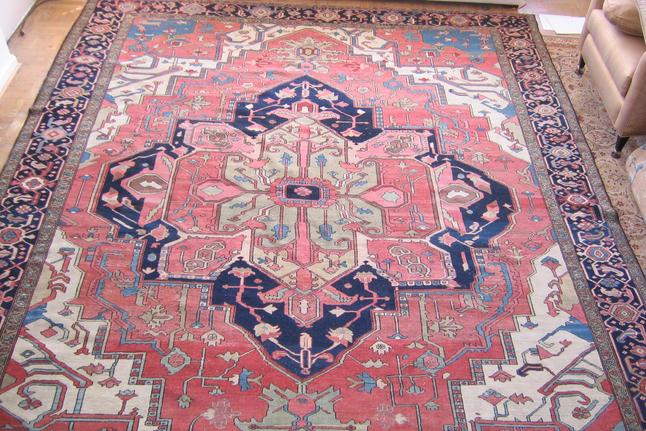 This semi-antique Heriz rug is very typical in its use of a central medallion and red and blue-indigo combination of colors.

The following is a short introduction to antique Heriz and Serapi rugs. We specialize in buying and selling Heriz Serapi rugs.

How to recognize antique heriz and serapi rugs

Heriz and Serapi rugs are easily recognized by their rectilinear and highly stylized geometric designs, typically with a central medallion, and less frequently an all-over repeated pattern. The main border most often uses a 'turtle' (or samovar) motif. The dominant colors are almost always red and blue, the latter typically reserved for the medallion and border, while the main field is typically red. Heriz and Serapi rugs use symmetric knotting which can be as coarse as 30 knots per square inch and seldom exceed 100, except in silk Heriz rugs.

Within this range, antique Heriz rugs are usually coarser and sturdier, with harsher colors, and somewhat more crowded and more angular design. Antique Serapi rugs usually are older and have softer, aged colors, and a less rigid and more spacious design. 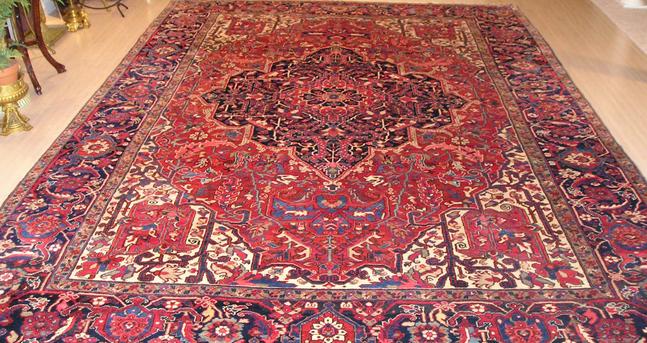 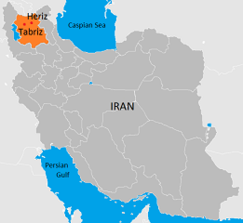 The sale value of antique Heriz and Serapi rugs

Heriz rugs were mass-produced beginning in the 1920s for the North American markets, although there are earlier specimens one would still refer to as Heriz rather than Serapi. The value of an antique Heriz rug is determined by its condition; the density of the weave; the type, which can be common or not; the colors, which can be more or less harsh; and the design, which can be more or less crude. At reputable auctions, the sale price of a room-size antique Heriz rug in good condition generally range from several hundred dollars for a common type with brash colors to a few thousands.

Antique Serapi rugs on the other hand were produced in more limited numbers. They are older and of finer weave than Heriz rugs, and accordingly more expensive. What differentiates one antique Serapi rug from another is the harmony of the colors and the balance of the design. At reputable auctions, the sale price of a room size antique Serapi rug in good condition generally range from a few thousand dollars to several thousands.

Antique Heriz rugs are named after the Heriz district in East Azerbaijan in Northwest Iran. A variety of rugs were produced in that district, including Serapi rugs and other less known types such as Bakshaish and Gorevan.

Heriz and Serapi rug production was a relatively modern venture in the late 19th century driven by Western demand. Nevertheless, one can still recognize the influence of older rug traditions, including Caucasian, Turkish, Kurdish, and of course Persian.

The label Serapi is somewhat controversial. Some claim that it was simply a marketing ploy to differentiate better quality Heriz rugs from more commercial ones that came later on the market. Auction houses such as Sotheby's and Christie's actually refer to Serapi rugs as Heriz.  Be that as it may, there are real differences between the two types of rugs, both in style as well as in quality, and a distinction is useful.

​Please take a look at our selection of Heriz Serapi rugs for sale at our store online.

The design of this late 19th century serapi rug is akin to a Heriz, but is more spacious and less rigid, and its colors are softer.