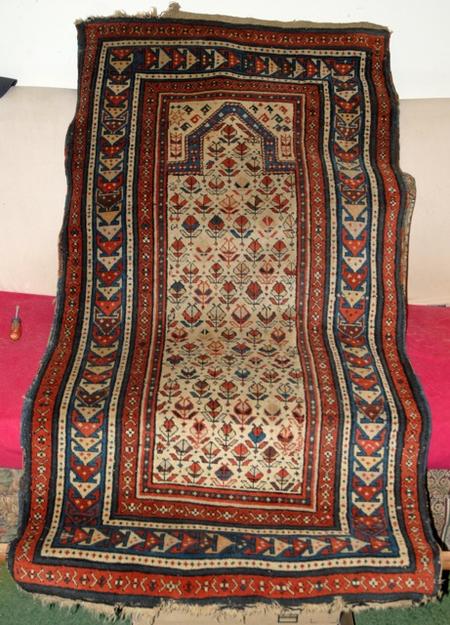 There is still a lot of contention about how early Caucasian rugs go back in history. Certain scholars attribute the earliest rug known, the 'Pazyryk', which dates back to 500 B.C., to Armenian weavers from this region. Whichever this may be, there is substantal evidence that the Caucasus has been a weaving center for many centuries.
The large majority of Kazak rugs are believed to have been woven by Armenians settled in the narrow mountainous region between Azerbaijan, Armenia, and Georgia. But the reality is probably more complex because of the historical, voluntary or forced, migrations of Armenians throughout the region, and because other ethnic groups, such as the Azeris, have woven similar rugs.
The oldest carpet known to be irrefutably of Armenian origin dates back to the turn of the 18th century. It is the so-called 'Gohar' carpet named after its weaver made famous by her inscription in the rug: "I, gohar, full of sin and weak of soul, with my newly learned hands wove this rug. Whosoever reads this say a word of mercy to God for me. In the year 1149 [1700 A.D.]." The accomplished craftsmanship in this piece and the existence of earlier pieces of similar structure point to a long tradition in weaving in the Caucasus. However, most of the antique Kazak rugs that have survived to this day date back to the late 19th century. 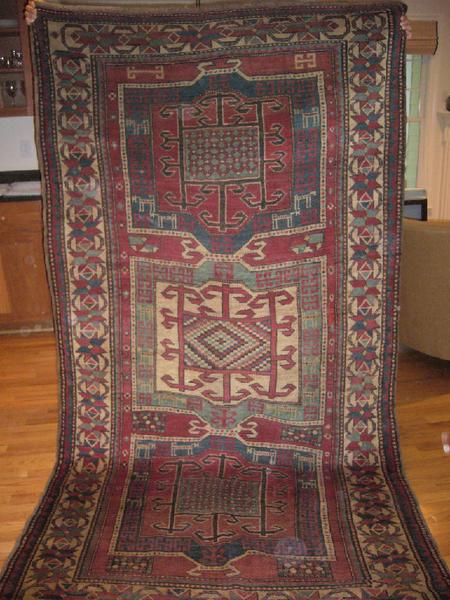 ​Antique Shirvan rugs are the counterpoint to Kazak, and equally versatile. These rugs came from the district of Shirvan in east Azerbaijan, and were mostly woven by Azeri Turks, which explains the numerous Shirvan prayer rugs, and to a lesser extent Armenians.
The motifs in antique shirvan rugs are somewhat dainty compared to Kazaks, making use of delicate highly stylized floral patterns, a wider range of colors and not as bold. The weave is finer and almost flat, and the pile is relatively short. hundred dollars for a common type with brash colors to a few thousands.

​Contact us if you wish to appraise a Caucasian Kazak or Shirvan rug. See detail on our appraisal services.

The sale value of antique Caucasian Kazak and Shirvan rugs

Antique Caucasian rugs are particularly sought after for their authenticity and individual character. While their design can be very simple compared to Persian pieces, when successful it can convey a
masterful balance of the geometric elements and dynamic movement. Above all, their value is determined by the depth, beauty, and harmony of the colors. At reputable auctions, the sale price of an antique Caucasian Kazak or Shirvan rug in good condition can range from several hundred dollars for a common type to several thousands.

There is a wide variety of rugs commonly referred to as antique kazak. They are recognized by their bold geometric patterns, making often use of medallions or large guls in square or octagonal shape, and bright colors with red often predominant. The pile is typically thick and the weave coarse, with wool warp left undyed and little depression, and wool weft often dyed red. One identifying feature is that multiple, three or four, threads of weft sometimes separate two rows of knots.
While antique Caucasian Kazak rugs can very diverse, certain types have been identified. This includes Borjalou, Fachralo, Karachopf, Lambalo, Lori-Pambak, and Sewan (or Sevan) Kazaks, whose names refer to the locales where they are thought to originate, and 'cloud-band', 'pinwheel', and 'tree' Kazaks whose names refer to their special design. Chelaberd or Eagle Kazak rugs are also customarily marketed as Kazak, but in fact they are from the Karabagh district to the south of the kazak region. 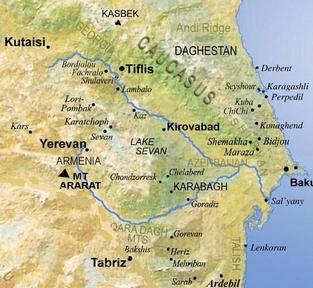 ​Please visit our store online for a handpicked selection of Kazak and Shirvan rugs.